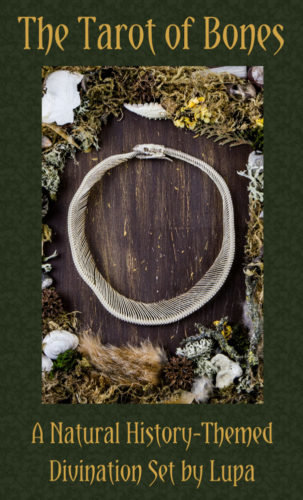 Tarot of the Bone Deck by Lupa

The deck is based on a series of 79 permanent assemblage piecescreated from bones and other natural materials. All of the traditional Major and Minor Arcana are included, along with the Happy Squirrel card, an in-joke in the tarot community based on an early episode of The Simpsons. While the deck has some influence from the Rider-Waite-Smith deck, a large part of the symbolism stems from my observations of nature, ecology, and the natural history of the animals whose bones are central to the card assemblages.

You’ll notice that each card has a unique color scheme that is independent of factors such as what suit it’s in, or traditional colors associated with each of the Major Arcana. So if you lay out, for example, all of the Wands cards, the borders are in colors ranging from blue to green to brown, rather than all the cards in one suit having a similar colored border. This is because I wanted the border to match the individual card–and the cards in each suit often vary widely in color and theme. When I was creating the card assemblages, I listened to the spirits of the bones, the tarot archetypes, and my own artistic inspiration, and so each card is the result of those creative meditations.